By Ruth Lottery
Save
Share
Write a review Report
HomePlacesDreamland 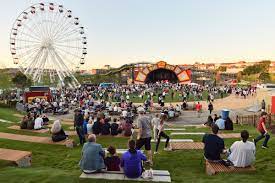 Described as the heartbeat of Margate, Dreamland has been one of the UK’s best-loved amusement parks for a century. The seaside park hosted a zoo, miniature railway, WWII troops, big bands like the The Who and the Rolling Stones – and it’s still going strong…

Considered to be the oldest-surviving amusement park in Great Britain, the site of Dreamland (as it was re-named in 1920) dates back to the British railway boom of the early 1870s when, in its original form, the ‘Hall by the Sea’ was operated by the famous circus impresario ‘Lord’ George Sanger.  The park was later snapped up by John Henry Iles, who set about transforming it into a pleasure garden and amusement park with the iconic Scenic Railway as its centrepiece, which opened in 1920.

Over the early part of the 20th century, the park thrived as a popular visitor attraction and music venue with Margate remaining a hugely popular vacation spot for Londoners. But the town and park’s popularity waned in the 1970s and 1980s as more Brits chose to holiday abroad – but there are plenty of people around today with fond memories of the then-named Bembom Brothers Theme Park!

Fast forward to 2003, when a plan to close the park triggered a ‘Save Dreamland’ campaign by locals and amusement park enthusiasts, whose successful campaigning led to securing £18m public funding to restore Dreamland and its jewels: the Grade II*-listed Scenic Railway, Grade II*-listed cinema complex and Grade II-listed menagerie cages.

Thanet District Council compulsorily-purchased the site in September 2013 and work began to restore the iconic Scenic Railway and the park. Capitalising on Margate’s swiftly growing reputation as a brand new capital of British cool, Dreamland Margate reopened in June 2015 with a wealth of new and rejuvenated features set to redefine ‘a day out at the seaside’.

Following significant additional investment in 2017, the amusement park was re-landscaped and expanded to provide a space that brings together lovingly restored vintage rides, thrilling new rides, art installations, adventurous street food, unique bars and an eclectic programme of live events. The ride line-up features old favourites such as Brooklands Speedway, the Gallopers, the Wedgwood Tea Cups, and The Waltzer alongside new adreneline-pumping rides such as Dreamland Drop, Dreamcatcher and Pendulum.

On the seafront, the original 1930s Cinque Ports pub has being brought back to life, offering modern pub fare, and the seasonal Ziggy’s Rooftop Bar offers unparalleled vistas over the iconic ‘JMW Turner’ skyline. The outdoor event space can accommodate 15,000 people, while the 1,100 capacity Hall By The Sea and the intimate Ballroom continue to attract top musical acts all year round.

Dreamland: the picture perfect, ‘all-you-can-treat’ seaside sensation, your one stop shop of culture, food, festival fun and must-try rides. Granny will say ‘this takes me back’ and the little ones will squeal ‘again, again!’

We’re the pride of Margate, the UK’s unofficial capital of cool. And so much more than just an amusement park. Dreamland is where ‘age’ is left at the gate. Strap on some roller skates or get interactive with art exhibits, alongside all your classic seaside food favourites. Don’t forget to hold that smile as you’re waltzed, flung or dizzied on one of 25 gum-flashing rides, because around every (rollercoaster) corner could be your next most ‘liked’ Instagram post.

We have more than 25 rides, classics old and new, for little big kids and big little ones too. There’s Teddy and Betty land for the smallest smile-seekers and the Scenic Stage is the place to find your new outdoor anthem. And keep an eye on the skies for our Seagull mascot, cos he’s certainly got his eye firmly locked on your chips!

Whether you’re looking to thrill or chill, it’s the place to find your smile, over and over again. ‘Shake it all about’ in a park-wide game of hokey cokey, enjoy your first game of pass the parcel in years (top tip: hold on a couple of seconds too long). Then watch the sun go down with a frosty one in the Roof Top Bar.

And the fun doesn’t stop there. Dreamland is fast becoming UK’s coolest music venue. Gorillaz and Sara Cox have sold us out (in a good way) and the big names keep on coming to our sunset sessions.

At the end of the day, cheeks will be sore from all the smiling, phones are bursting with selfies and it’s time to collect Dad from the roof top bar.

Because, we’ve had the time of our lives…